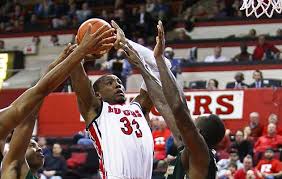 “But without faith it is impossible to please Him, for He who comes to God must believe that He is, and that He is a rewarder of those who diligently seek Him.” (Heb. 11:6)

I have been so struck with just this: Richard is on a not very good basketball team (by the world’s standards) – a close game for them is when they lose by 20 points.  But over and over throughout the game, as Richard grabs the ball and drives to make a shot, we all hold our breath, willing, willing, willing that ball to go through the hoop.  And we audibly moan when the ball hits the rim and bounces off.

Richard has made one basket.  One.  In 3 games.  And he is my hero.  I just love that skinny lanky boy racing up and down the court, playing till his side aches.

Here’s the thing: When he misses a shot, I don’t mutter under my breath “Well, what do you expect when you don’t practice?”  I don’t greet him after the game with “Honey, THAT’S why you better start practicing.”  No!  Instead I put my arm around his sweaty shoulders saying, “That one outside shot was SO close!  And you were AMAZING under the boards!”.  and I am just beside myself with pride that he tried so hard.

Why is this?  Do you think it is because of my mother’s heart?  I am absolutely convinced this is not it…it is because I have my Father’s heart.  And He watches every attempt we make and cheers us on, and rejoices when we make one basket every three games.

And I can even prove it to you.

We recently studied the book of Judges and I was dumbfounded – really, I was – at the lack of spiritual and moral character that each judge showed.  And some of the worst ones are then listed in Hebrews 11, God’s Hall of Fame???  Samson made God’s All Star team?  Surely you remember Samson:  The spoiled brat who ordered his parents “get her for me NOW” – her being a Philistine girl living in the land of the Philistines, Israel’s mortal enemy.  Did he learn from the disaster that happened with her? No.  Years later we find him returning to the land of the Philistines, and after his being with a prostitute meets Delilah, another time bomb.  The last scene of his life shows him with both eyes taken out by the Philistines, chained up, at one of their feasts where they are praising their god for being stronger than Samson’s God (it certainly looked that way).

Reading and studying Samson’s story, I find that out of 4 chapters devoted to his life, there is only 1 verse where he does ANYTHING that has ANY merit in it.  One verse out of 4 chapters of muck: Judges 16:28 “Then Samson called to the Lord, saying “O Lord God – remember me I pray!  Strengthen me, I pray, just this once, O God, that I may with one blow take vengeance  on the Philistines for my two eyes!”

It is as if God’s eyes are upon us, not to catch up when one hand is in the cookie jar, but to catch us when we do one thing semi-right.  Like suiting up for the game and trying for a lay up even when we haven’t practiced all week long.

I find this especially comforting today.  It was hard coming to the LORD this morning.  Yesterday we had a houseful of kids over and I thought I’d bake them some banana chocolate chip oatmeal cookies.  But instead of the kids eating them, I did.

I am sure God was watching me  with my hand repeatedly in the cookie jar.  After I’d said to myself, “o.k. – NO MORE”.    “Repeatedly” is the key word here.

Yet this morning, as I felt dull and stuffed, and couldn’t see how I could come to God, full of cookies but empty of passion and faith, feeling the familiar Saturday “I’m sick of Saturday chores” within myself, feeling the plodding of day to day life and wondering where my passion for Christ went, I come to Him and hear Him whisper, “Good job Debbie!  You showed up for the game!   I’m putting you on my All-Star team and am surrounding you with clouds of witnesses who will cheer you on.  I’m so proud of you for coming to Me – you’ve got your red team uniform on, the “covered by the blood team”.  You almost made a basket yesterday – did you hear Me cheering?”

And I realize – God is not troubled or distressed by my eating too many cookies last night.  He’s simply pleased that I showed up today, so He could put me in the game.  That’s the one thing I did that was semi-right: I came to Him.  Believing that He IS a Rewarder of those who seek Him.  I came.

O, go to Him, now, today!! He is rooting you on!  He is waiting to catch you do one thing semi-right!  He’s dressed you in His colors!  He is FOR you!!