Isaiah 49:16  “See, I have engraved you on the palms of my hands; your walls are ever before me”.

We have never carved pumpkins – Halloween isn’t a tradition that is followed in Latin America – although there was, in Guatemala, the day of “Burning the Devil” or “Day of the Dead” and streets were lined with pinata type devils to torch in the evening.  The kids wanted to carve pumpkins.

Notice that the pumpkins are just sitting there stupidly, mutely.  They don’t get to even breathe a hint of what they’d like to become.  Lydia is carving a wolf howling at the moon.  Is that what her pumpkin wants?  Maggie, a stormtrooper from Star Wars; Richard: batman.  The poor pumpkins had no chance.   They could resist all they wanted, or attempt to help all they wanted, and really, it made no difference at all.  None.  None. 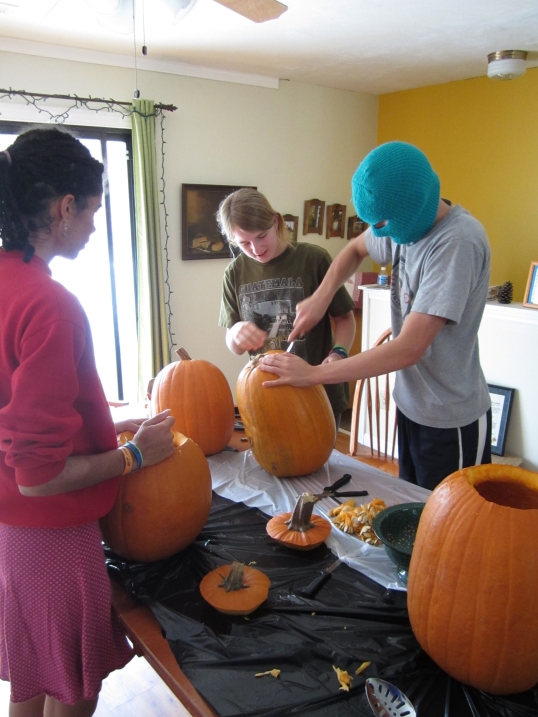 Rich can’t stand the smell of “pumpkin guts” so finds a creative way to not wimp out in the carving process.  The kids were intent and Tom and I watched as ideas came into shape.

Carving is hard and time consuming.  Somehow He is not only the Carver, as He crafts you into what He has created you to be, but He is also the One that is carved into….taking the punishment of that blade as it cuts into flesh.

He WILL have His way with you, you know.  You WILL turn out to be His Handiwork, and you even will have a new name given you when He is finished.  He is the Author and Perfecter of you, He is the Potter and He Will Have His Way, and You Will Turn Out Perfect.

And who thought of God as the original tattooer?  He can not forget you.  He has not left you to your own devices.  you may be stinky at times but He even knows how to accommodate that.  You, beloved, are continually before Him as He carefully crafts you, using every little thing and every big disaster to carve you into exquisite beauty and purpose.

The pumpkins were done and we waited until dark and lit them and put them on our TV cabinet. (I wanted them OUTSIDE but was voted down – WHO EVER puts carved pumpkins in the house, lit???) Can you see the images on these?  We sat in the dark and looked for other pictures…The Batman (which we laughingly declared was batman with two boots sticking out of his head on either side), the wolf howling, the stormtrooper (which I came up with the creative picture of R2D2 with pigeon toed feet), proud kids at their creation, happy parents that for this one moment all was well with the world…